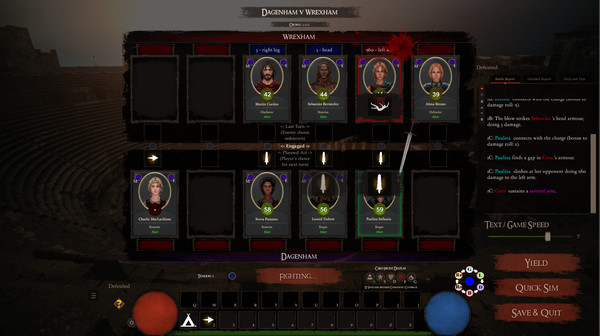 In stock
Developer: Eternity Games
Jan 28, 2021
Categories: Indie, Most Popular, Most Viewed, New and Trending, Popular Games, Recently Updated, Simulation, Sports, Top Selling, What's Popular
Special offer:
799
You must be logged in to get this game for free.
Log In or Register
1 / 12 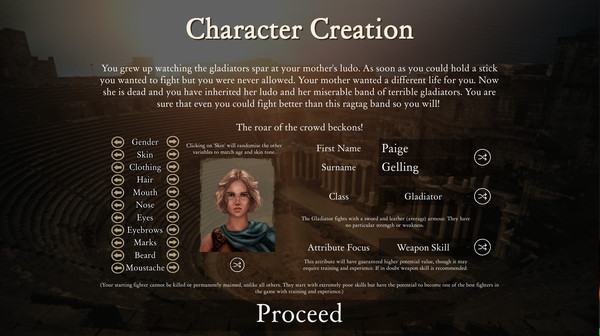 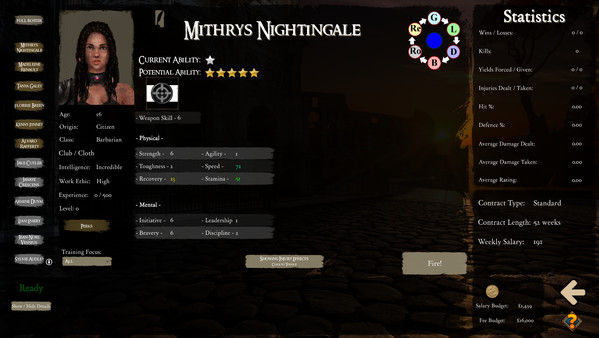 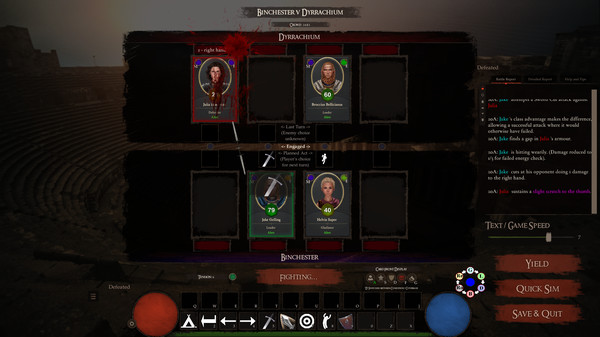 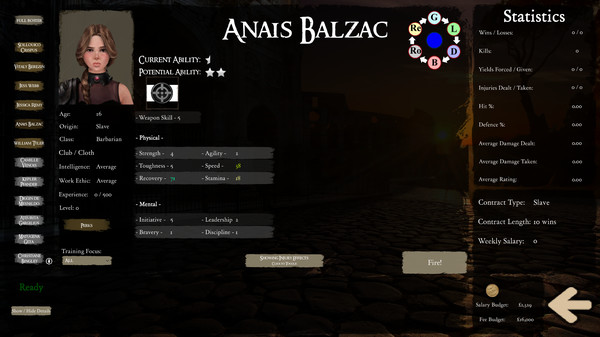 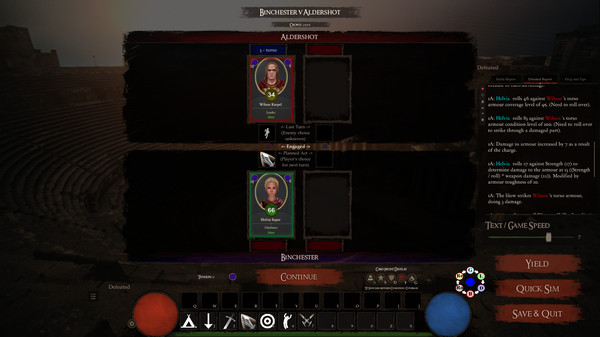 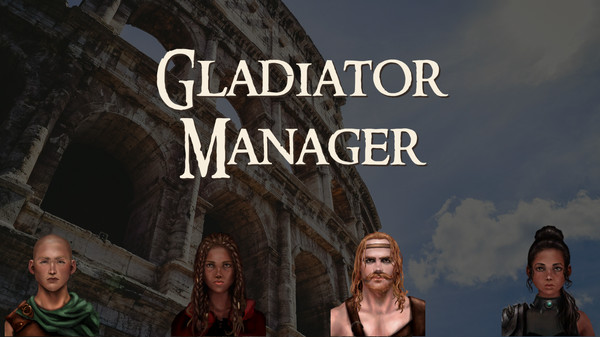 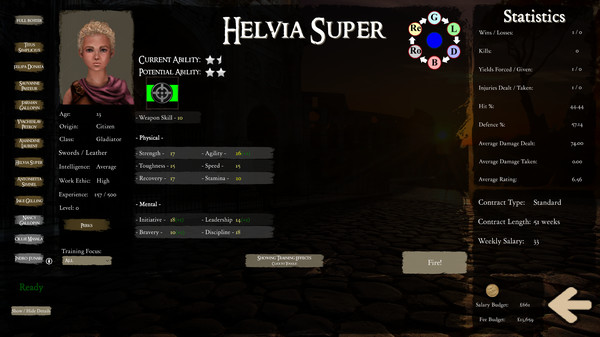 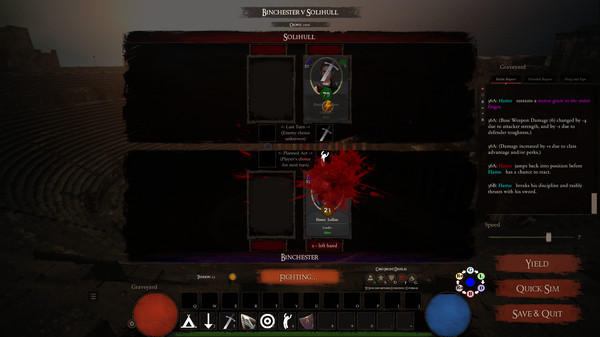 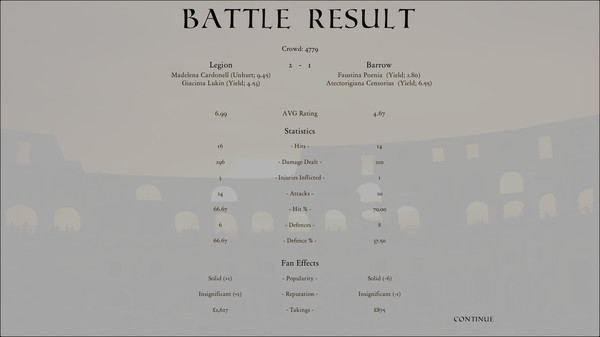 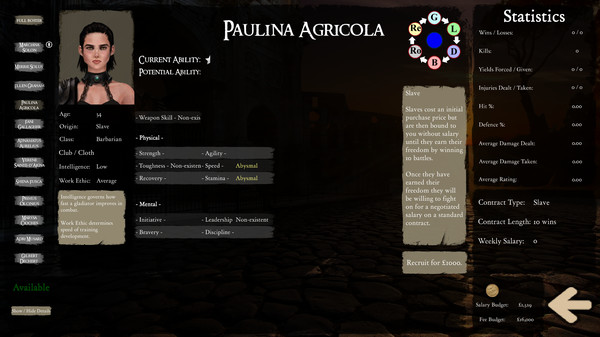 The player takes on the role of manager of a team of gladiators, trying to win a league and a cup. The back end managerial part of the game has similarities to games like Football Manager and Out of the Park and involves hiring new fighters by judging their potential and skills, training them, and then selecting the right combination to gain tactical advantages over opposing teams.

Fighters can be veterans, citizens, criminals or slaves, each with their own unique game mechanisms and characteristics, and come in six classes: gladiator, rogue, barbarian, defender, retarius and leader. Each class can hybridize by selecting perks from other trees.
Key Features
Tactical Battles
The battles are turn-based, tactical, and deeply simulated. A key feature is that all orders are issued to all fighters simultaneously by the player and the AI resulting in a rock, paper, scissors outcome that depends on whether the fighters are trying to attack, defend, move or pull off a special strategy. The chances of success depend largely on the relative control of the fighters, and that in turn depends on whether they have managed to defend successfully in previous turns.

Fighters can gain access to over 30 special moves by levelling up, and another 60+ passive perks.
Fantastic Artwork
Fighters are rendered beautifully by a powerful random portrait generator that can create a whopping 310,810,500 combinations from different parts lovingly crafted by the amazing French artist Mesrile. We are really proud of the result which in our view tops the portraits put out by many triple A games like CK2.
Transparent and Player-Controlled Randomness
Another key feature to the game is total transparency of battle mechanics. As a simulation game there is naturally a lot of random number generation on the default settings, but by clicking on the ‘detailed battle report tab on the battle screen the player can see every single roll that the game makes, and can determine exactly why any particular outcome has occurred. This also allows the player to work out what fighter attributes are especially important in any given situation.

Dont like RNG? Just turn it off! The game has three modes: simulation (default); low RNG (akin to the D&D D20 system); and fixed - with no RNG at all!

In line with the battle mechanic transparency the game is also completely transparent about the effectiveness of training and fighter development. A fighters ability to improve attributes is determined by a focus set by the player and their innate potential for a given skill - something the player can begin to work out by watching how well they develop. The game always lets the player know when training succeeds.
Deep Simulation
The game keeps a wide selection of statistical records of the fighters for all the sports fan stat geeks out there, and displays them at the end of the fight.

All other enemy v enemy battles are fully simulated with no shortcuts, to ensure that the league is always an accurate representation of the ability of the teams. The AI gets no advantages and fights with the same options as the player. There are five leagues, with ten teams in each, and a cup competition that spans the leagues each season.
Detailed and Realistic Injuries
Whether they succeed or fail, a fighter can be injured, maimed or killed in the arena, and the game has a detailed injury mechanism whereby a fighter can suffer from over 100 different specific injuries that have varying effect on their ability to fight. Some injuries can result in blindness, concussion or loss of a limb, with corresponding consequences in battle. In the end a fighter will either be killed or will succumb to fear and yield.
Customisation
The game can be considerably customised, with selectable themes for the world (team names, division names) and for the fighters, with randomly generated names from Rome, Gaul, Britannia or modern-day Europe (England, Spain, France, Italy, Russia). The player can even choose total randomness, giving a mixture of names from all themes.

Not enough customisation? Download any free SQLite editor and change any aspect of your save game.
Present Build
The game is currently fully functional and can be played successfully over multiple seasons. There are bound to be some remaining bugs but there are no known game breakers. The game is pre-alpha and has not yet been released.
Plans for the Future!
Game development will not end with release. I fully intend to continue supporting the game going forwards, adding features for free, with no planned DLC. That may change if I decide to introduce any really massive new features.

Current plans for the next year include:


How to get Gladiator Manager steam key free

1 - First step is to register as the member
2 - Choose an offer available and make sure you choose the one that's giving you lots of coins
3 - Complete the offer you have chosen, you must use real information to complete an offer / survey
4 - Get coins instantly to your account
5 - Unlock Gladiator Manager cd key

Choice of the Vampire
FREE
499